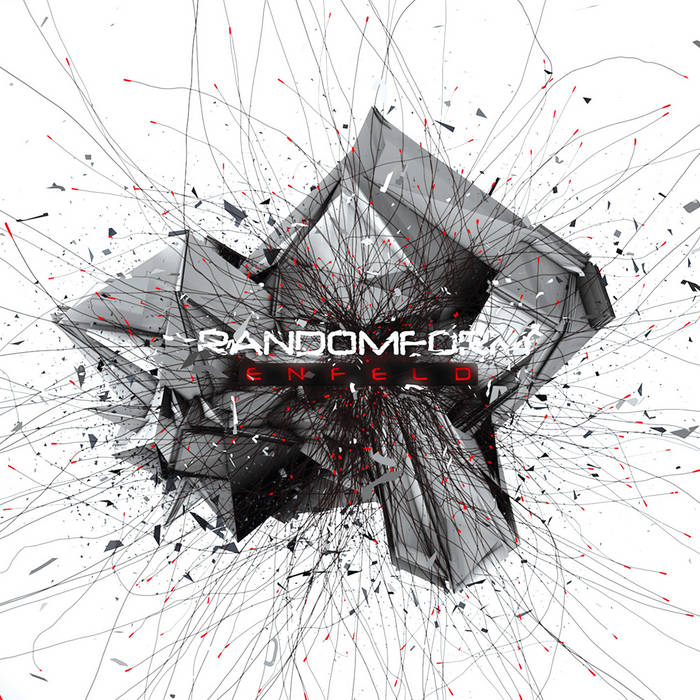 Reissued in 2014 as limited edition of 55 CDs in flexible plastic case with 2 bonus tracks: "Arclight" and "In Movement".
The tracks "Enfeld Shell" and "Dylon Section" are extended versions.

--
Bucharest’s Sorin Paun is one of the most prolific electronic music agents to perform on the digital web scene recently. Known for intense releases and extremely moody radio mixes, you have probably heard of his two most famous acts: Datacrashrobot and Randomform. Debuting on High Grade Media with a full-length record as Randomform, his trademarks are well present and better than ever. Know for intense fluid beat work, allied to some original and dense glitch textures, Enfeld shouldn’t disappoint fans of complex electronic music who’ve been longing for some decent glitchery in 2011.
It’s easy to get lost on the dreamy and spacial tunes present here, the cavernous ambient work contrasting with the always-morphing beats, create some fascinating auditive journeys, quasi out of this planet feelings that will certainly make you comeback to pay attention more closely to that little sound that’s bugging you, never knowing for sure it’s abstract origin.
Turn off the lights, boost up your stereo and let the chills flow through your body.
F.G.

The balance between technology and humanity always treads a fine line. Trying to capture personal perspectives with futuristic audio extracts akin to that of a high-budget Sci-Fi blockbuster is just exactly what Randomform (aka Romania’s architect of sound, Sorin Paun) exposes on Enfeld, his debut outing for High Grade Media. Melding sparse electronic waveforms, glitch, clips and snips all rolled into one, Randomform’s style isn’t too far off base next to musicians like Richard Devine and Access To Arasaka; as a matter of fact, they compliment each other in terms of how IDM has migrated to new terrain without losing its inspired artistic groove.

Displaying extraterrestrial diversions, microscopic attention to detail and oblique movements, a peculiar vision of future worlds unveils itself, if somewhat subliminally. Darkened by fractured beats and moody digital-signal-processing, Enfeld releases a swarm of insects flying over the radar of experimental electronics. How else could you explain this manifest of audio discoveries?

If it weren’t for artists like Randomform taking audio and visual to the next degree in terms of advancements of the genre, time would simply stand still and repeat itself. And this is where Randomform delivers; his skillful use of degenerating algorithms (similar to what Autechre did on “Gantz Graf“) exposes the rough nature of this albums ominous fascination. Artists like Brothomstates, Di:Fuse, Shapeshifter and Randomform have reshaped sounds to their ultimate breaking point and extracted the most from these atmospheric tentacles. Either way you sculpt it, Randomform’s style contains a more deformed construction. Ripping through thinned melodious tones and pealing layers of sonic debris, Enfeld displays new definitions for audio abstraction and does so with ease and control. Play this one in parallel to (the recently reviewed) Genetic Control Frequencies by FMcontrol (Crazy Language, 2011) and put a helmet as you discover another planet. [ igloomag.com ]

Randomform is one of those electronic musicians who seem to have more time than the rest of us mortals. Maybe it’s while we sleep that they come up with all these alter egos and new albums. Randomform’s other guise is as Datacrashrobot, which is a name I’ve been seeing attached to a few things on the tides of the internet. That might not be helpful in assessing the strength of this album, but it is true. Another thing that is true is that Randomform was the man behind the artwork for the recent Mitoma album on Daddy Tank, so yet again I am presented with a conflict of interest. Can I be objective about this album ? I think I can because I recently attended a day long “Objectivity and Fairness In Internet Media” training session. The biscuits were delicious but the coffee was weak.

So, in my new enlightened state of objective awareness what can I say about this album ? Well, don’t listen to it on the first nice day of spring because it will make your ears unduly hot and confused. It is not a Spring sounding album. If I was going to choose an ideal season to listen to it, it would be the change between Roboautumn and Nuclear Winter. What am I talking about ? This album is like being buried under an avalanche of sheet silicon. It’s like being bullied by nanobots while sitting shivering in a badly lit underpass recovering from a night of stim abuse. There is no light. There is almost no melody. What you are presented with is like a miniaturized version of the Blade Runner soundtrack on a badly defective USB. Utterly mechanical and determinedly percussive with snippets of cold wave synths and ominous echoes and rumbling. The only non mechanical sounds are the decidedly mechanical sounding vocal samples that peek through the layers of grime and judder. My only criticism of the album would be that it might be a bit too dark. I have trained my brain to sit through hours of aural punishment but if you were browsing for a good place to start with in the densely packed world of glitchy experimental electronica and you started with “Enfeld” it might be a bit overwhelming. I would also say that Randomform should try and keep in mind that its perfectly ok to be influenced by Autechre but developing a unique naming strategy might be advantageous to avoid being dismissed as a simple clone, because there is an obvious similarity. At risk of repeating myself, this is not an easy listening electronica album. It’s not one to pop on at a party. But if you’re looking for a soundtrack to a particularly introspective and sullen mood, this would do the job and the tunes to start with would be “Overcast”, “Polyconaire”, “Dylon Section”or “Xylene Antiform”.
[ sittingnow.co.uk ]

Written and Produced by Sorin Paun
Artwork by Vicetto - www.vicetto.com